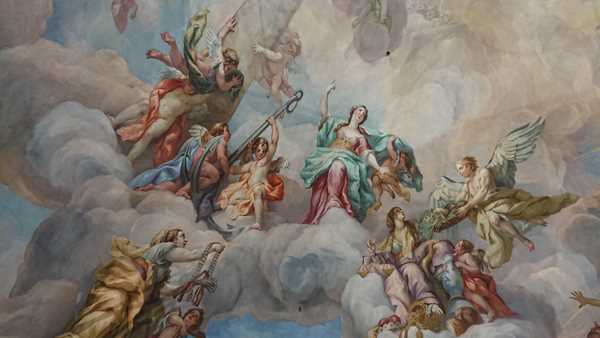 It was a very scary situation; it played like a scene from a movie. Imagine the car in the movie Chitty–Chitty Bang-Bang, our Ford station wagon was flying. The van hit a tree and landed on its side. An Emergency Medical Technician traveling behind us hurried to help my severely injured wife, who was suspended sideways, still belted in her seat. He held her to prevent further injuries, and spoke calmly. The ambulance took forty minutes to find us in Yellowstone Park and rush my wife to the hospital, where the medical personnel repaired her broken clavicle.

What were the chances that the person driving immediately behind us was an EMT, willing and able to assist my wife? He even prayed aloud to comfort her. I had no other explanation than this person was an “angel” sent by God.

Peter too had an angel from God when he faced a situation over which he had no way out. Imprisoned with four squads of soldiers assigned to guard him and restrained by an iron gate, Peter slept chained between two guards. In  Acts 12 we read how an angel of the Lord appeared to him in his cell, instructed him, and led him out to his praying friends.

Desperate was I, unable to aid.

God sent an angel, right actions he made.

With perfect timing, meeting my need.

Some angels are messengers sent by God to help us and to fulfill God’s purposes.

PSALM 51: THROWING ONESELF ON THE MERCY OF GOD

PSALM 1: A PSALM OF TWO WAYS

INTRODUCTION TO THE PSALMS (PART 2)

INTRODUCTION TO THE PSALMS (PART 1)

A JOURNEY INTO PUBLISHED WRITING

SPIRITUAL LESSONS LEARNED WHILE GROWING UP

SOWING AND REAPING AT THE BEACH

IT’S NOT MY FAULT

I AM A TEACHER

OUT OF THE COMFORT ZONE

A JOYFUL NOISE OR MUSIC?

WHERE LOVE AND JUSTICE MEET

A NEGLECTED BOOK OF THE BIBLE

GOD USES THE BIBLE AND OUR EXPERIENCES

LET’S ENCOURAGE ONE ANOTHER

BITE-SIZED PRAYER TO BEGIN EACH DAY

THE VALUE OF BIBLE QUIZZING

THE NATURE OF LIGHT

LESSONS FROM A PAPER ROUTE

SOME WONDERS OF GOD’S WORLD WE HAVE SEEN

A MESSAGE FOR ALL THE WORLD

A WORK IN PROGRESS

I CAN’T DO IT ALL BY MYSELF

TELL ME WHAT YOU WANT

THE SHADOW OF THE ALMIGHTY

HUNGER FOR THE BIBLE

A BOOK OF REMEMBRANCE

MY TOP TEN ON REACHING 80 YEARS

REMOVING THE CANCER OF SIN

A TRANSFORMATION IN MY PRAYER LIFE

LESSON FROM A NIGERIAN WATER TOWER

A KNOCK AT OUR BEDROOM DOOR

A BOLT OUT OF THE BLUE

GOALS IN THE RACE OF LIFE

GOD HAD A DIFFERENT PLAN

AN ETERNAL LIFE AND DEATH DECISION