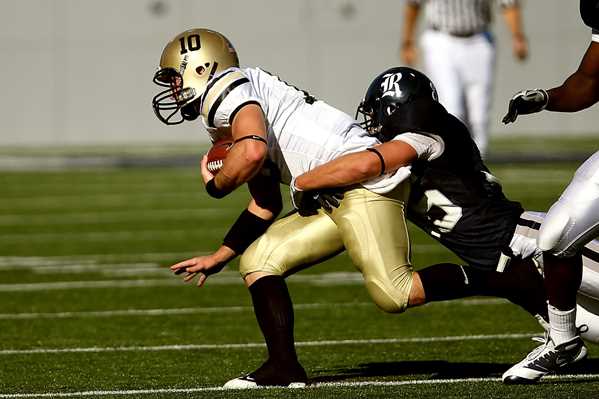 Dear Friends,
I trust you are doing well and looking forward to the Lord's Day.
Bill Glass played a full career with the Cleveland Browns as an All-Pro defensive end before retiring for another career spreading the gospel of Jesus Christ.
In his book Get in the Game, Bill Glass tells of the time his team was battling the St. Louis Cardinals (back when they were still in that city). Cleveland had St. Louis backed up to their own 5 yard line. Cardinal quarterback Charlie Johnson took the ball and was running around in the end zone looking for someone to throw it to. Meanwhile Bill Glass, right defensive end for Cleveland, was bearing down on him from his blind side, while Paul Wiggin, left end, was barreling toward Johnson from the other side.
It was a defensive end's dream. They are about to sack the quarterback in his own end zone. This can be a game-changer. Bill could just hear the crowd cheering.  This was going to be great.
Just before Glass and Wiggin smashed into the quarterback, the referee just couldn't stand it. Five hundred pounds of defensive backs were about to clobber this poor little scrawny quarterback. This just isn't right!
The referee yelled, "Watch out!"
Instantly, the quarterback ducked, causing Wiggin and Glass to hit head on, knocking both of them out cold.  Charlie Johnson ended up gaining ten yards and a first down.
When Bill Glass came to, he felt so weak he could barely speak above a whisper. He reached up and pulled the referee down close so he could hear him. "You know," Bill said, "You really shouldn't have done that!"
The ref, whom Glass does not identify in his book, said, "Aw, Bill, I'm sorry."
Then the referee went over and apologized to Paul Wiggin and to the Cleveland Brown coaches.
It was the only time in Bill Glass' career a referee apologized to him for anything.
These days, that scene would be on Sportscenter and replayed a hundred times.  Within days, that ref would be looking for a new job.
An apology alone is rarely enough, but it is a necessary first step.
Here are some important reminders.
1) It is important to apologize when we have done wrong; do not overlook this.
2) Words can be potent weapons for harm and powerful forces for good.  The words "I'm sorry, please forgive me" may not be everything, but they are often worth a great deal. Words have value.
3) After the apology-or along with it-action is needed.
4) An apology cannot undo the wrong.
5) With the apology needs to come a new way of life.
An apology alone is rarely enough, but it is a necessary first step.
6) Saying "It's easier to get forgiveness than permission" is a cheap shot, indicative of a manipulative personality, and completely unworthy of followers of Jesus Christ.
So much more could be said on this subject, but this is a good start!  I'm tempted to add that if anyone needs more on this, well - I'm sorry I've run out of ideas!
See you on Sunday in person or join us on line.
In the light of His glory and grace,
Pastor Doug
Tweet
Tweet

Praying for The Lost