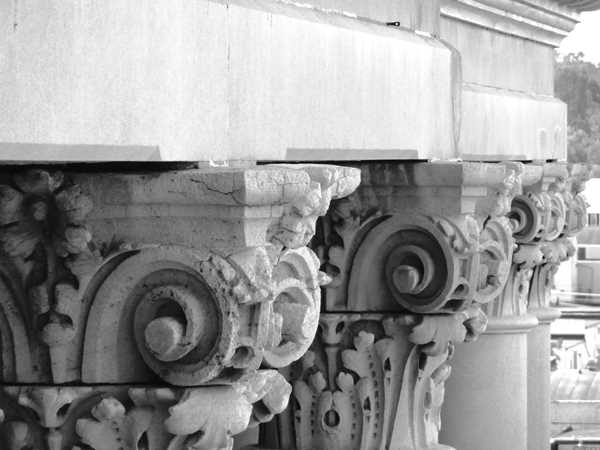 Dear Friends,
I trust you are doing well and looking forward to Sunday.
Sir Christopher Wren was the greatest architect of his day (1632–1723) having been granted Knighthood for his achievements in 1673.  His skills were greatly in demand and he was given responsibility for rebuilding 52 churches in the City of London after the Great Fire in 1666, including what is regarded as his masterpiece, St Paul's Cathedral, on Ludgate Hill, completed in 1710.  In 1689 the city of Windsor commissioned him to design and oversee the building of their town hall that stands to this day known as the Guild Hall. When the structure was completed, however, the mayor refused to pay the bill insisting that it needed more columns than the ones Wren had originally designed. It didn’t matter that the columns holding up the building were more than adequate, the mayor wanted more.  So Wren added four more columns to the building, each identical to the first but with one exception: they lacked one inch from reaching the ceiling. They were not holding up anything!
A question we all need to ask and answer is this: What are the foundational and functional truths or pillars of the church and what are the meaningless and cosmetic?
I’ve suggested before and given our current world they need to be repeated again and again. The Five Solas of the Reformation are the foundational truths for the church today. Those Five Solas are:
Sola Scriptura - [Scripture alone]. Holy Scripture is our only authority in matters of doctrine and Christian living. The church is not to be governed by the traditions of men, nor by the rulings of popes or councils. The "wisdom" of man profits us nothing in the realm of the Spirit. Scripture, and Scripture alone is our guiding light.
Sola Fide - [Faith alone]. We are saved by faith alone, not by works (Eph. 2:8-9). False churches teach salvation by sanctification, or in other words, one must attain righteousness before they can be justified. This, in essence, is salvation by works and qualifies as an "anathema" gospel.
Sola Gratia - [Grace alone]. We are saved by God's grace alone and not by any personal merit in us. Salvation is a gift that cannot be earned or merited by man.
Solus Christus - [Christ alone]. There is no other Mediator than Jesus Christ, not Moses, not Mary, not the saints, not angels. There is only one Savior, Christ Jesus, our Lord. We cannot be saved by any other "for there is no other name under heaven that has been given among men by which we must be saved" (Acts 4:12).
Sola Deo Gloria - [The glory of God alone]. The purpose for which God created all things is to manifest His own glory. This is all-encompassing. The reason why God made the heavens and the earth, why He created the angels, why He made man and put him on the earth, why He created heaven and hell, why He sent His Son "to save His people from their sins, is to give God glory!  "Not to us, O LORD, not to us, but to Your name give glory" (Ps. 115:1).
These my dear brothers and sister are the essential, non-negotiable, pillars of the church. Without them, we are not the true church - period!
In the light of His glory and grace,
Pastor Doug
Tweet
Tweet